... shall not be infringed.

One Shot Or Not?

Is the Palm Pistol® Single Shot Configuration Really a Disadvantage?

The Palm Pistol® is the world’s first handgun designed specifically for the needs of the disabled. The USPTO, after a thorough domestic and international patent search, issued the 23 claim utility patent number US 7,905,042 B2 on March 15, 2011 “with no prosecutions,” a legal term that means there was no prior art. Research indicated there has never been a production firearm like this anywhere in the world. The design was the subject to a host of domestic and international media attention in late 2008 due its initial classification by the FDA as a “medical device,” later rescinded due to political pressure. Many pros and cons were explored by the blogosphere. The pros are obvious to a disabled shooter who may have no other alternatives, so let’s talk about the most common objection.

People who may not have given the matter enough consideration object to the single shot capacity of the Palm Pistol®. However, this configuration was done intentionally for several reasons:

All things being equal, and in real life they never are, a multi-shot self-defense firearm would seem to offer a better chance at stopping one or more attackers. But this presumes the intended victim is thoroughly trained, has firsthand “combat” experience using justifiable lethal force, is a walking encyclopedia of firearm regulations, has a law degree and whose independent wealth can finance a lengthy criminal/civil investigation and trial; and is prepared to become the center of a media frenzy like George Zimmerman. This doesn’t describe you? Then you may wish to think again about single shot guns. 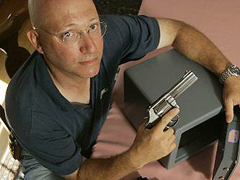